Think before you drink and ink! 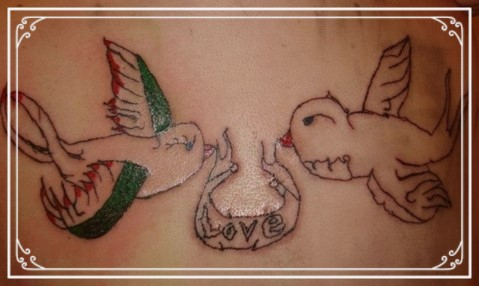 We’ve all heard stories of people getting drunk and then deciding to visit a tattoo studio for a tattoo – it’s a timeworn tradition. In fact I recently had a man in his 70s enquiring about getting rid of a tattoo that was acquired on a drunken end-of-season footy trip to Kings Cross back when he was in his early 20s. Perhaps you too are the owner of a drunkenly acquired tattoo? Sometimes it’s your first tattoo, and more often than not, you wake up with a scorching hangover and a tattoo you instantly regret. We see it acted out weekly on Tattoo Nightmares.

For the most part, these tattoos aren’t necessarily badly done but they are designs chosen in the spur of the moment by an inebriated mind and probably not ones you would choose in the sober light of day. Many people choose to live with these tattoos (maybe as a reminder to not do it again), some choose to cover them up (with a more carefully thought out tattoo), and some choose to remove them.

The thing that is concerning these days is the number of people who have tattoo machines at home. I’ve just Googled ‘tattoo machines for sale’ and I’m gobsmacked at how cheap and readily available they are. You can buy a wide variety of machines for under $20! It’s astounding. So what is happening now, is that people are getting tattoos in the spur of the moment whilst drunk – not in late-night tattoo studios – but in their mate’s kitchen. By their mate. Who has no training whatsoever in tattooing. The mind boggles. Not only are these people risking infection and other medical complications but they are going to wake up with a scorching hangover and most probably a really, really bad tattoo that they instantly regret. For an example, just see the recent post on our Facebook page which showed a British man who woke up after a mate’s stag night with a pair of Ray Bans tattooed on his face.

If you, or someone you know, ends up in this situation there is some good news. Tattoos applied by amateurs are usually much easier to remove than professionally applied ones, requiring less treatments. Depending on how deep the tattoo has been placed in the skin and how much ink has been used, it could take just a few laser treatments to remove it. Feel free to contact us for a free consultation and we can give you an idea of how many treatments you may need to remove your amateur tattoo. And don’t worry, we’ve seen plenty of amateur tattoos that are probably worse than yours!

So, don’t believe that a tattoo done by your mate in his kitchen will give you an ‘amazing long-lasting artwork for years to come’ (as one website claimed their machines would!?!) – only a tattoo artist can do that. And let’s face it, we are spoilt for choice in Geelong for amazing tattoo artists.

You have Successfully Subscribed!